How to Guarantee Water Soluble Cannabinoids for Beverages 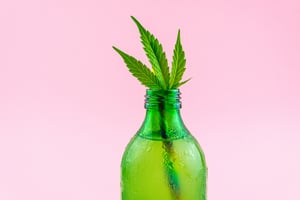 Cannabinoids, chemical compounds found in the cannabis plant, are naturally fat soluble, meaning they are dissolvable only in nonpolar solvents and, thus, not capable of mixing with water. It’s a major problem that often makes the manufacture of cannabis-based beverages difficult since cannabinoids can’t be broken down and mixed with other ingredients naturally for any sustained amount of time. Cannabis-based beverage products, for instance, work faster, taste better and last longer only when they are able to be mixed properly with — read: dissolved completely within — other ingredients. Leaving cannabinoids in their original oily state, then, makes it impossible to guarantee the bioavailability, stability or longevity of cannabis beverages. Luckily, manufacturers have options. Here’s how you can create water soluble cannabinoids for beverages and, therefore, always ensure that your cannabis drinks are of the highest quality:

What are Water Soluble Cannabinoids for Beverages?

As mentioned, if cannabinoids are left in their natural state, cannabis-infused drinks would need to be shaken and then immediately consumed. It’s not unlike an oil-based salad dressing that has to be shaken before used. This is never ideal, however, since shaking a product can actually degrade it: carbonated drinks lose their bubbles, for example, or ingredients get unevenly distributed, making the drink taste funny, look cloudy and/or rendering it unable to provide a consistent dose of active ingredient(s). Furthermore, because the cannabinoids are still basically fat molecules which have been only temporarily suspended in a liquid, the body must still process them through the digestive system, a much longer process compared to that of water soluble cannabinoids dissolving directly into mouth, stomach and intestinal tissues.

To solve the problem, manufacturers need to create water soluble cannabinoids via emulsification. Emulsification is the process by which normally immiscible substances are mixed together so that separation can’t occur. There are several different types of equipment that can facilitate emulsification, but the most effective and efficient one is a BEE International high pressure homogenizer. BEE stands for Best Emulsifying Equipment.  Our high pressure homogenizers create stable emulsions that guarantee water soluble cannabinoids for beverages each and every processing run.

Most emulsifying processing equipment utilizes only one or two forces to physically break apart and mix samples. BEE International high pressure homogenizers, however, utilize a combination of forces, including turbulence, shear, cavitation, impact and high pressure, that more forcibly reduces a sample’s particle size, creating larger surface areas to which bonding can occur. The result: shelf stable mixtures with increased potency and bioavailability. In addition, our patented mixing technology eliminates the need for pre-mixing and includes customizable options for the combination of forces, as well as the intensity and duration of operation, allowing manufacturers to manage the production of water soluble cannabinoids for beverages in the fewest amount of passes, saving them time and money.

You might also wish to download our free eBook, “3 Reasons Why High Pressure Homogenization Improves Cannabis Products” for additional information.