An Overview of Mechanical Methods of Cell Disruption 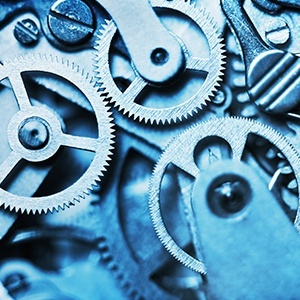 With the bead method (a.k.a. “beadbeating”), very small beads (0.1-6 mm in diameter) made of glass, ceramic or steel are mixed with a sample that has been suspended in aqueous media (i.e. a solution in which the solvent is water). This process shears open the cell wall, yet in a manner that is gentle enough to ensure that the biological molecules within the cell remain intact.

Often used for plant and fungal cells, sonication uses ultrasonic homogenizers to induce vibration in a titanium probe that has been immersed in the cell solution. This triggers a process called “cavitation,” which creates very small bubbles that eventually explode and produce shockwaves that ultimately disrupts the cell wall.

It is also possible to achieve cell disruption by grinding via a mortar and pestle. This method is often used with plant samples that have been frozen in liquid nitrogen. Once the cell wall has been disrupted, solvents are added to extract the biological molecules.

The use of blenders (both high speed or Waring) can be used to disrupt cell walls. This is the same process used by centrifugation, which separates or concentrates materials suspended in a liquid medium.

Often used when working with soft plant material and algae, freezing is used to achieve cell disruption via a series of freezing and thawing cycles. Freezing forms ice crystals, which expand upon thawing, and this ultimately causes the cell wall to rupture.

Microwave (along with autoclave and other high temperature methods) are used to disrupt the bonds within cell walls, and also to denature proteins. This is a somewhat risky method, as the excess heat can quickly damage the rest of the cell.

Homogenizers pump slurry at high pressure (up to 1500 bar) through a valve, which is instantly followed by an expansion through a separate exiting nozzle. Cell disruption is achieved by applying shear forces to the cell membrane.

A growing number of life science researchers are choosing BEE Laboratory High Pressure Homogenizers, because they represent a radical departure from conventional equipment and provide more experimentation options and capabilities for cell disruption, as well as emulsions, dispersions and liposomes.

Learn more about our groundbreaking laboratory high pressure homogenizers here! To read more details about these cell lysis methods and non-mechnical cell disruption, download our FREE eBook "7 Key Factors to Consider When Choosing a Cell Lysis Method" by clicking the button below!